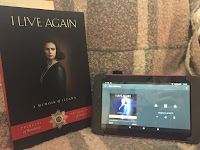 As I listened to this audiobook, my mind kept returning to one thought... Princess Ileana, during the time of the war, exemplified the Proverbs 31 woman:

13 She seeketh wool, and flax, and worketh willingly with her hands.14 She is like the merchants' ships; she bringeth her food from afar.15 She riseth also while it is yet night, and giveth meat to her household, and a portion to her maidens.16 She considereth a field, and buyeth it: with the fruit of her hands she planteth a vineyard.17 She girdeth her loins with strength, and strengtheneth her arms.18 She perceiveth that her merchandise is good: her candle goeth not out by night.19 She layeth her hands to the spindle, and her hands hold the distaff.20 She stretcheth out her hand to the poor; yea, she reacheth forth her hands to the needy.

This book is not about her monastic life or the establishment of the monastery. This book is a journal of the events of Princess Ileana's life during a very specific time period- her life during WWII and after- leading up to her family leaving Romania. How she "lives again" as she transitions from being a princess of Romania to the Archduchess of Austria to the time of WWII, and, finally, to when she is forced with her family to leave her country.
Princess Ileana was not idle- her ability to learn nursing, build hospitals, give to the poor, and convince communist officials to support her endeavors were inspiring.
As I finished this audiobook, I was inspired by her untiring example of giving to others and helping her fellow man. And, her adventures, which she writes about very matter of fact (almost as if she believes that anyone else would have done the same thing which shows her true humility). I am eager to learn more about how Princess Ileana became Mother Alexandra of blessed memory, how she "lives again" in monasticism.
Technically, this audiobook is very well done. The quality of the recording is amazing. The narrator, Kristina Wenger, does an excellent job- I almost believed it was the voice of Princess Ileana herself!
The one downside to the audiobook is that the published book does contain illustrations and photos of Princess Ileana and her family. But, that is the downside to audiobooks, especially autobiographical books, is that there is not a way to convey the photos or artwork. We happen to own a copy of the book and I was able to look through the photos/illustrations (but I waited until after I finished listening to the book in order to write a review of the audiobook).
I was gifted a copy of this audiobook for an honest review. Purchase your own copy of the audiobook through Audible.com or purchase the printed book through Ancient Faith Publishing.

Posted by AgiaSophiaAcademy at 12:27 PM